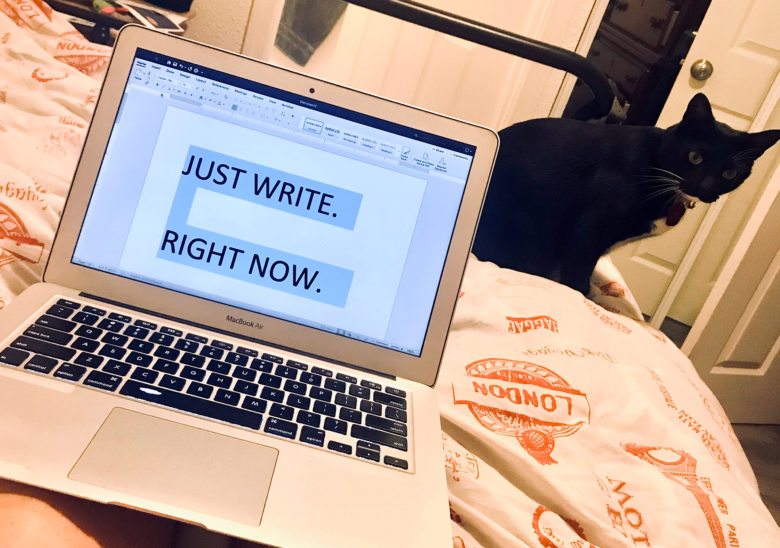 People often ask me what makes me a writer. Which I guess is their way of asking what separates me from that person who props up a bar in WeHo every weekday happy hour, talking about the hot project they’ve got “in development” that a producer (who happens to be their best friend since high school) is interested in. The project they’ve been writing for five years but haven’t quite got around to finishing yet… The truth is, that was me a while ago. I drank expensive cocktails in cozy, plush bars tucked in trendy Melbourne alleys and told anyone who’d listen about my AWESOME ideas, while I mentally rehearsed my Oscar speech (it gets longer every year). But most of the time, I was having too much fun, was too hungover or didn’t feel like writing, so I didn’t actually write. At all. I was always waiting for inspiration to strike. And it rarely really did. Never enough to the point I’d actually write anyway.

That’s not to say I don’t have fun these days. I have a lot of fun. And now that I don’t drink like I used to, I not only wake up with a relatively clear head, but I have the added bonus of actually remembering exactly what and how much fun I had the night before. I digress. What makes me a writer – a real one, rather than someone who just talks about writing – is that I actually write. Every day. No matter what. That is my personal rule. Some days I write for hours. Some days it’s been less than 5 minutes, but I have written every day. No matter what. I was once on a camping trip, where we had stayed up talking around the campfire until 2 in the morning. I was about to drift off to sleep when I remembered I hadn’t written that day. So I wriggled out of my sleeping bag as quickly as I could and grabbed my laptop (which I might as well have surgically attached to my hip for convenience). I mostly have the doc I’m working on open for easy access. I think I probably changed two words and maybe added a sentence before I crashed – but I still wrote. I have written on the days of funerals, on days when I have not slept, when I have been sick. I think I have probably missed maybe 2 or 3 days of writing in the past year for various circumstances, but I have been fairly consistent.

As a result of all this continually writing every day, I have written and sold a feature, finished 2 pilots, had another feature optioned and am now working on a fictional podcast and another feature. Honestly, I rarely feel like writing. I will find myself procrastinating (right now for example, it’s 8:30pm on a Sunday night, I’ve had all day, the house is sparkling clean, there’s a roast in the slow cooker, I’ve watched 2 movies and I’ve only just sat down to write). I definitely wouldn’t have finished ANYTHING if I didn’t have the Freedom App, which completely locks me out of the internet for a chosen period of time. It’s funny because I didn’t realize I was actually flicking on to Facebook almost sub-consciously.  The minute I got stuck on a sentence or was searching for a word, I’d click away. Without even noticing. It would take Firefox proclaiming “Page not found” before I’d realize I’d even clicked off Final Draft (if I was researching, I would have to research on my phone). Most of the time though, once I get rolling, writing isn’t so bad. I mean it is hard. It does take work. And effort. The things that are worthwhile always do. I think it was John August who said he hated writing but loved having written. But that’s why I do it every day. Because the more I do, the more it becomes habit and less work. Like brushing your teeth. It’s just something you do without really thinking about it. And I’ve tricked my brain a bit too. “Just write for 5 minutes”, I tell myself. And then I get on a roll and it’s 4 hours later. I’m also less scared of getting stuck now. I can put myself through that excruciating torture of not really having a good answer to “what happens next” or “how they get out of that one” if I know it’s only going to be for 5 minutes and I don’t have to solve it all right then and there.

But me, as a writer (and well everyone really), still needs to have fun. I still need to get out and talk to people – people’s experiences, mannerisms and personalities are where I get a lot of inspiration from. So sometimes that means actually putting on pants and leaving the house and going to socialize. And sometimes this even inadvertently leads to actually having fun. I highly recommend having fun, even though it often takes effort (particularly in LA where it usually involves traffic). But my point is, after you have fun (or maybe even before), make sure you write. Even if it’s just for 5 minutes. Because 5 minutes of anything, can eventually lead to something. And what will 5 minutes of nothing get you?

Happy Writing! (Even if it’s for 5 minutes) Thanks for reading my first proper blog!

How are your characters feeling? »