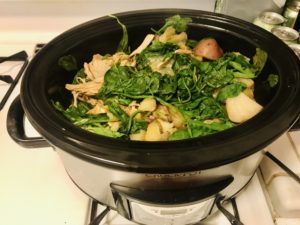 I was at Costco on the weekend – something I usually try to avoid at all costs – and it was packed as usual. Teeming with dazed looking Dads, mission-charged Moms with long lists and determined expressions, huge families with frazzled parents (grandparents in tow) roping their multiple kids in as pack mules to maneuverer overfilled carts. Chaotic consumerism at its finest.

In the midst of it all, was this couple in their mid-30s standing next to a display of baby blankets. They were completely frozen – locked in their own world, oblivious to the impatient masses streaming around them. The man was leaning into the woman, hand on her arm and he was murmuring intensely. She was nodding. Fighting back tears. Her face immobile. Eventually, she gave a small smile, he squeezed her hand, gave her a gentle kiss on the cheek and they slowly moved along. Neither of them, saw me watching. A private moment on display for everyone to see. But nobody did – they were also locked in their own worlds.

When I was battling a bout of depression (years ago now), I did a lot of my crying on public transport. For me, this was the perfect solution to the overwhelming sadness that needed to be expressed – I didn’t want to be a downer and constantly cry to my friends, but I also didn’t want to cry alone (interestingly enough, I don’t recall anyone ever asking me if I was alright).

Are you seeing where I’m going with this yet? My point is how much a particular location can add to and emphasize your story. Some people enjoy sex in public because of the risks involved in possibly getting caught. In the same way, two characters having a very private moment in public can also add dramatic tension to a scene. Will a kind stranger intervene? Will everyone notice? Will someone shame them for yelling at each other? Or do they lower their voices and lean in so no one can hear them?

A bigger location doesn’t necessarily mean a more dramatic scene either. A confined location can equally add tension. I’ve been stuck in a car at the Mexico border, with someone in the passenger seat consistently screaming angrily at me. For hours. People in neighboring cars occasionally glanced over with curiosity, but no one intervened. I had no escape and no way of getting them out of my car. I just sat there with tears rolling down my cheeks, waiting for them to get tired and stop. Normally, in any sort of argument, I could walk away. Or kick them out of the car. But not this time. In this instance, the setting (my car at the Mexican-US border) added another layer of tension to an already volatile situation and I was trapped by circumstance. When you write a scene, think about how the location or setting can add tension or emphasize the general theme of your story. (Another good example is the fight scene in the elevator in Captain America: The Winter Soldier – just don’t write a spec script with a bunch of characters stuck in an elevator – it’s such an overused device these days).

Anyway, that was a little insight my recent trip to Costco brought me. The resultant slow-cooker pot roast turned out pretty good too (totally worth it).

« I have this disease called… DEBBIE.
Who Says Corporate Writing Has To Be Boring? »