I have this disease called… DEBBIE. 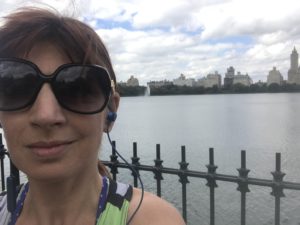 So this blog is a bit more personal than what you’re used to. Since I talk a lot about how as a writer, it’s important to write from the heart and be authentic, I thought I would actually put my money where my mouth is (and against some recent advice). But I want to be more open and I want to talk about this stuff. Because to me, this is where the good writing comes from. From being able to talk about the hard stuff in a palatable way.

So I have this disease called… DEBBIE. Debbie Downer. You might know her as depression. I’ve given her a name because I’m beginning to understand that even though she feels like she’s part of me, and even though she feels real, she’s not. She’s not real and not a part of me at all. In my 20s, she was a fairly consistent presence in my life, but in the past 20 years or so – particularly since I stopped drinking – she’s been rather quiet and well behaved. Up until the last few months or so that is. Then she came back into my life with an unexpected vengeance.

Debbie likes to live behind my right orbital socket, just behind my temple. She likes to distort my perception of reality by telling me things like, “I should have done a better job”, “I’m not worth being paid for work”, “I’m not a good friend”, “I’m not that funny”, “I can’t write at all”, “I’m not worth paying for writing”. She is a constant voice in my head that takes the small negative inklings and amplifies them to LOUD SHOUTING level, overwhelming my rational brain and drowning out any positive reinforcement I receive from the outside world.

So powerful is my Debbie, that she can even take any positive reinforcement (no matter how strong) and twist it into a negative. To: “Jo, thank you so much for fixing that problem for me”, Debbie will reply, “Yeah, but Jo why the hell didn’t you spot that earlier and fix it months ago, you moron?”. Nothing good you have to say to me, will ever be taken at face value by Debbie. In my 20s, she took me to some dark and scary and painful places that took me a long time to crawl out of. In fact for a good six months, I didn’t know she was there at all. I thought I was just doing terribly at everything I did. She’s dark. Twisted. Insidious. And very, very, clever.

Drowning out Debbie is exhausting. My rational brain doesn’t have the strength to shout her down without professional help. Self-medicating is also not an option for me. So I’ve had to learn other methods to deal with her. One of the first things I did was give her a name. (And please if you are a real dear friend of mine called Debbie or Debra, please know this isn’t personal, YOU are not a downer). In recovery, one is often told to name their disease. I took it literally. Giving my depression a name has helped me distance myself from it and draw a more defined line between what’s real and what’s not. Like I said, she feels very real. She seems very real. And the way she makes me feel is very real. The things she tells me are not.

So now I talk to my depression. I tell her things like, “I know that’s how you see it, Debbie, but let’s take a step back and see how it really is. Jo, if you were really so lousy at what you do, would people still be hiring you? If you were such a bad friend, would anyone bother calling you?”. And then I practice mindfulness. I acknowledge that right now at this present moment I am feeling overwhelmed/teary/sad/however. Then I say to myself, “Okay, that’s how you feel. It’s okay to feel this way. Let’s just put this to the left side of our brain and go on with our days as best we can, okay?”.

My self-talk is my biggest enemy, so what I try to do now is talk to myself as if I was a good friend. Instead of beating myself up for perceived failures, not doing good enough, and not feeling good enough to do better, I acknowledge and accept the present. I try to avoid telling myself (and Debbie) how I should be feeling. Telling myself how I should be feeling and beating myself up for not being able to function better, only makes it worse. When I look back on how bad Debbie has beaten me down in the past, the fact that I’ve been able to function at all is a miracle in itself.

I’ve also sought help. My stepfather always said the world would be a better place if everyone had therapy and a massage once a week. And he’s right. Debbie exists in a vacuum. She’s much less vocal when I talk about her others and share my experiences – which is completely counter intuitive.

I meditate (I hate admitting this out loud, it always sounds wanky to me but there I admit it, I meditate. It helps me stay centered and focus). I exercise (the bare minimum. I hate the gym. I only go to stop my ass sagging). I eat pretty healthy (except for when I don’t).

And gradually, Debbie is becoming less vocal and less powerful. I doubt she’ll ever go away for good, but she is definitely not a persistent part of my life anymore.

So what does all of this have to do with writing? So the positive thing about Debbie is that this has given me some understanding of a mental illness and how it impacts individuals and those close to them. It gives me more empathy towards others who are fighting similar battles (and the tragedy of those who lost to it). It gives me more to draw from and channel into my writing. And I hope that when I write scenes or stories involving characters who are struggling with an issue themselves, that it will sound authentic and resonate with those who are reading.

Anyway, if this did resonate with you, feel free to reach out to me.